Choosing a branching model for macchiato

Lately, I’ve been working on Macchiato to bring web application development libraries for ClojureScript on Node.js. Get a few people of different backgrounds involved on a project, and pretty soon a discussion about methodology will emerge.

Since both Dmitri Sotnikov and myself are working on some libraries at the same time, we had to decide which approach to use.

There are two major alternatives: Git-flow and Github-flow (with Gitlab-flow being a slightly more elaborate version).

Git-flow was described by Vincent Driessen on his 2010 post A successful Git branching model. I’ve found it to be a great way to organize a repository. In short, you:

There are other considerations for how to deal with hotfixes, but that’s the gist of it. You can see a git-flow diagram below: 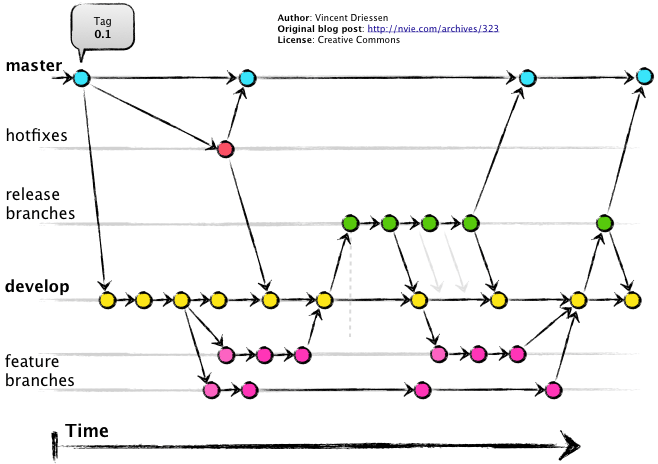 This is a great approach and it has several advantages:

There are helper scripts to assist you with Gitflow. Atlassian’s SourceTree supports it directly as well.

Proponents of Github-flow (and its cousin Gitlab-flow) have a few complaints about it. The main argument is that it goes against continuous delivery, since at some point someone needs to “flip a switch” and do a release from develop into master.

That’s a valid argument. Nothing is less continuous than manual switch-flipping.

The Github-flow proposal is that you should:

These are valid points and they do result on a lighter-weight workflow. But they ignore that there are cases where you want a manual release, a negotiation of what is supposed to go into any particular version.

My take on it

Both systems have their uses. I think something like Github-flow is a great approach if what you are developing is an application. On that case, just using a master branch plus features branches works well, and you can do your releases in an automated fashion. The deployment itself is the atomic end-product you care about.

When you are building a library, where people outside your team might depend on specific versions, I think git-flow is the right approach. For a library, you want to lump your versioned changes together into a conceptual unit - including potentially separating or delaying breaking changes. At this point, coming to an agreement on what should go into a version makes sense, as does the manual release process of git-flow.

If anybody outside of your team depends on your versioning scheme, or will need to have a clear conceptual overview of what changed on a particular release, I’d recommend using git-flow.

If whatever you are releasing is the final artifact, and it will be used but others will not need to reference its version, then GitHub-flow does the trick.